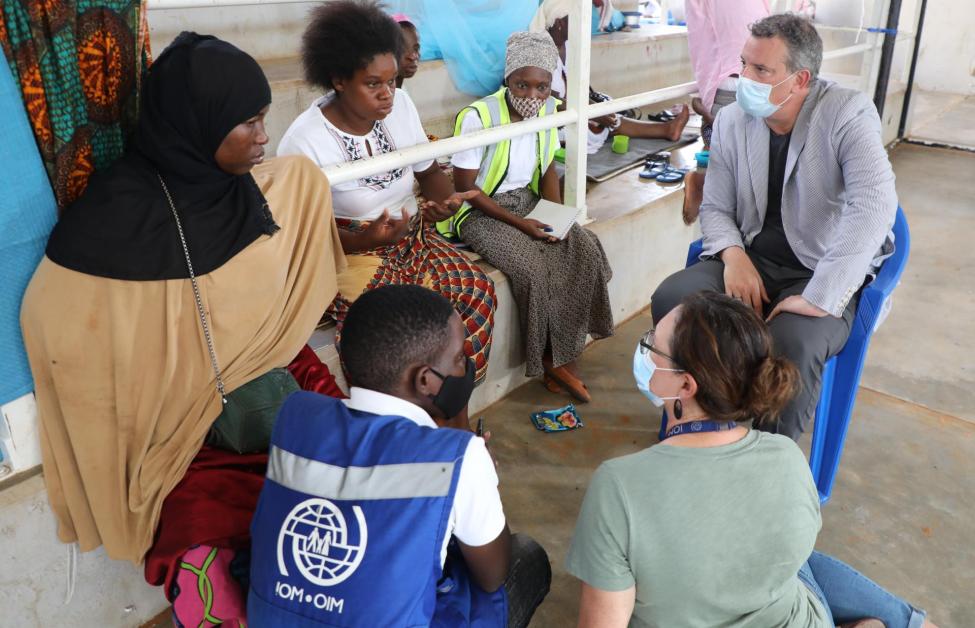 Pemba – Nearly 30,500 people displaced by recent violence in northern Mozambique face increased hardship as the humanitarian situation intensifies across Cabo Delgado province. Funds are urgently needed to respond to the emergency, which has displaced nearly 700,000 since the onset of violence in October 2017.

IOM’s Director of Operations and Emergencies, Jeff Labovitz, visited Mozambique this week to express condolences to the families of those who lost loved ones in the recent attacks in Palma, and solidarity with displaced and affected communities in Cabo Delgado.

“Cabo Delgado has seen unprecedented, rapidly increasing levels of displacement over the past year. Displaced people are vulnerable and in need of urgent and comprehensive humanitarian assistance,” said Labovitz.

“IOM is working with UN and non-governmental partners and supports the Government of Mozambique to alleviate the suffering of people who’ve been suddenly driven from their homes and communities.”

Labovitz met with humanitarian partners and government representatives, including from ministries and local authorities in the capital, Maputo, and in Cabo Delgado. He also visited resettlement sites in Metuge District and the Transit Site in Pemba, which hosts people recently displaced from Palma.

He spoke with host families and with displaced people. Many expressed their desire to move to a safer place where they could resettle.

At the Transit Centre Labovitz spoke with Rabia, a woman displaced from Palma who recounted her harrowing experience:

“My husband was killed, but my two children and I survived. We moved between locations for several days without food or money. We made our way to Afungi and from there we boarded a flight to Pemba.”

“I am going to persevere, but the situation is very difficult. I don’t know how I’m going to provide for my children without a space to live or equipment to start farming,” she added.

IOM’s Displacement Tracking Matrix (DTM) continues to record, on a daily basis, increased numbers of people displaced from Palma to safer areas. Several days in the last month have seen more than 1,000 arrivals per day. Of the displaced, 75 per cent are women and children – including pregnant women and unaccompanied children – and more than 1,000 of the total have been elderly.

“Remarkably the communities of Cabo Delgado – who themselves have increasing humanitarian needs – host the vast majority of displaced individuals. Support from the international community is needed to relieve some of this pressure and focus more attention and support,” continued Labovitz.

He commended the government’s provision of land for displaced families in resettlement sites, which enable families to cultivate land and restart their lives. IOM-supported efforts to establish these sites aim to ensure more dignified living conditions for residents.

IOM is working together with humanitarian partners to carry out multi-sectoral assessments in order to guide the delivery of humanitarian supplies, including in hard-to-reach areas. The situation in Cabo Delgado remains critical, especially in areas that, due to the security situation, are inaccessible to humanitarian actors.

“Sadly, calls for greater funding for this emergency have gone largely unmet.  We need to come together to ensure that people have access to water and sanitation, shelter and food and are protected from gender-based violence and other forms of abuse,” Labovitz said.

IOM continues to provide support to people displaced from Cabo Delgado through the provision of psychosocial support, protection assistance, support and referrals for health services, shelter and non-food items, camp coordination and camp management. The Organization is also tracking populations and their needs through DTM to inform the response. Most recent displacement figures are available here.

IOM’s Global Crisis Response Platform provides an overview of IOM’s plans and funding requirements to respond to the evolving needs and aspirations of those impacted by, or at risk of, crisis and displacement in 2021 and beyond.