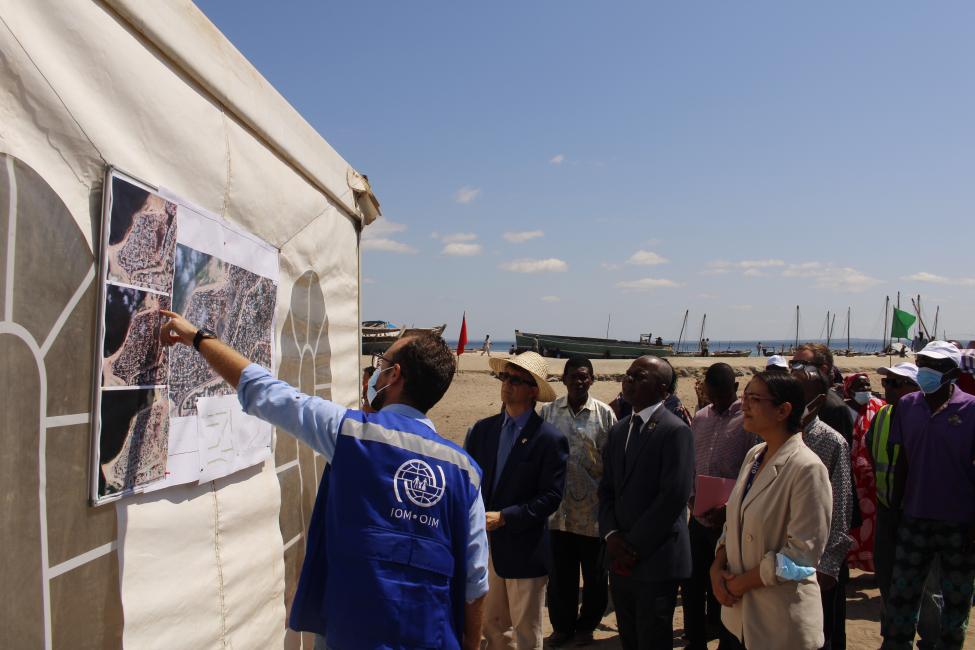 10 May 2022 Pemba – Today, the International Organization for Migration (IOM) in Mozambique, accompanied by the Ambassador of the United States to Mozambique, Mr. Peter H. Vrooman, handed over a rehabilitated drainage system to the community of the Paquitequete in Pemba district, province of Cabo Delgado.

The population of the Paquitequete community has doubled since the situation of insecurity in the province of Cabo Delgado began in 2017, which has left over 780,000 people displaced across central and northern Mozambique (DTM Baseline Assessment Report Round 15, February 2022). The Paquitequete community currently hosts over 10,000 Internally Displaced Persons (IDPs), which has placed a significant strain on community infrastructure and has caused social friction. A damaged drainage system and lack of a barrier wall to the sea in the community led to regular flooding and public health concerns. Therefore, community members prioritized working together on this common goal, strengthening social bonds in the process.

“IOM’s work through its Community Resilience and Peacebuilding (CRP) Programme strengthens the ability of communities to prevent and manage the negative effects of violent conflict. Projects such as the rehabilitation of the drainage system in Paquitequete are significant in their ability to pair softer peacebuilding approaches, such as dialogues, with tangible community investments that bring community members together around a common cause”, said IOM Mozambique Chief of Mission, Laura Tomm-Bonde.

“The United States government is committed to partnering with Mozambique to ensure communities such as Paquitequete remain resilient in the face of terrorism and other crises,” said Ambassador Vrooman. “This infrastructure project is an example of what is possible when a community is empowered to respond to local challenges and when all voices are heard.”

Thanks to the support of the United States Agency for International Development (USAID), the drainage system is the culmination of over two years of work undertaken in partnership with the Government of Mozambique and the Paquitequete community to prevent violent extremism and promote stability and peace. The project, which provided short-term employment for over 150 community members, was the result of extensive dialogues where community members undertook a conflict analysis, identified sources of community tension and prioritized projects that build social bonds between community members and the local government.

Through continued investment from USAID, IOM and the Government of Mozambique will continue to work on stability, prevention of violent extremism and peacebuilding projects in 2022 in Cabo Delgado, aiming to reach over 40,000 people in communities vulnerable to conflict in southern and northern Cabo Delgado with tailored community investments contributing to peace and stability.

IOM's work to contribute to peace, social cohesion and stability is closely aligned with Objective 2 –Minimize Adverse Drivers– of the Global Compact for Safe, Orderly and Regular Migration (GCM). In 2022, IOM funding requirements amount to USD 77.3 to continue and scale up its Humanitarian, Development and Peace Nexus (HDPN) approach in northern Mozambique, contributing to conditions in crisis contexts that are more suitable for development efforts (IOM Mozambique Roadmap for northern Mozambique).  Following an HDPN approach, IOM seeks to reach sustainable solutions striving to contribute to the achievement of the Sustainable Development Goals while implementing the GCM.

Over 700,000 Affected by Cyclone Gombe in Mozambique Still in Need of Humanitarian Assistance as IOM Scales up Response